Apple announced that it will release iOS 8.2 to the public today, with many bug fixes and support for the upcoming Apple Watch. iOS 8.2 was first seeded to developers along with the WatchKit SDK back in November, allowing them to start preparing apps for the iWatch

iOS 8.2 has been released for all iOS 8 compatible iPhone, iPad, and iPod touch devices. The new release includes many bug fixes and feature improvements. iOS 8.2 download also available via OTA update simply go to Settings >> General >> Software update. But if you’re hope to Jailbreak your device when iOS 8.2 Jailbreak tool released, so upgrade your device using iTunes. you can download iOS 8.2 ipsw file from below downloading links 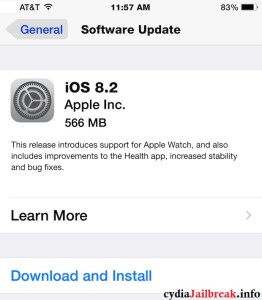