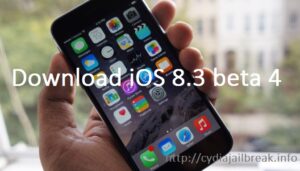 iOS 8.3 beta 2 download can be downloaded now through the OTA update too. No need to connect to the developers center. If you need iOS 8.3 for your idevice, you can get it now. It supported to later devices from iphone 4S and ipad mini. Both updates released with the Apple watchKit app, featured iMessaging, Emoji, Apple car play, Chinese Apple pay apps and supports on Google two step verification